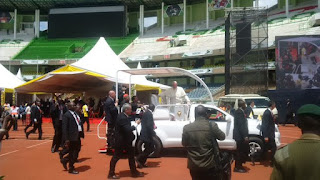 The curse of tribalism, the ghost of corruption and the threat of radical teachings yesterday formed the topic of Pope Francis’ talk with thousands of young people in Nairobi.
The Holy Father dropped the religious red tape, turned to his mothertongue, Spanish, and through a translator, engaged thousands of eager Kenyan youth in a heart-to-heart talk at a packed Moi International Sports Centre, in Nairobi’s  Kasarani neighbourhood.
The global head of the Catholic Church confessed that “even in the Vatican there are cases of corruption” and lamented that it was something that disturbed him every day. But his mission yesterday morning was to inspire a change in attitude among the thousands of young people in Kenya whose role models made their money through dubious means.
“Corruption is something that eats the inside. Like sugar, it is sweet. We like it. It is easy… you end up taking so much sugar that you become diabetic or the country ends up being diabetic. Each time we accept a bribe and put it into our pockets, we destroy our hearts, our lives and our country. Please, don’t accept the taste of that sugar called corruption,” said Pope Francis.
He didn’t spend his time quoting the scriptures or speaking cryptically. Instead he gave real life examples, such as that of a young civil servant who was told by his boss that the job was to do that which puts lots of money in the pocket, and not to render services to change lives.
“Corruption takes away our joy; it takes away our peace. Corrupt people don’t live in peace,” he said.
Then, he spoke about a funeral of a corrupt person, who according to a woman Pope Francis spoke to, told him that the man had stolen so much that the coffin couldn’t close because of so much loot that the fraud wanted to be buried with.
“What you rob through corruption will stay here and someone else will use it. But also, and I ask you to keep this in your hearts, what will remain behind is the lack of good you could have done, but didn’t… corruption is not a path to life, it is a path to death!” said the Holy Father.
The cheers erupted in the stadium. If it was a football match, the crescendo of the shouts was equal to that which follows the scoring of a winning goal. 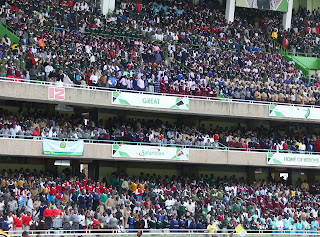 Pope Francis had sat at the main dais patiently taking notes using a black pen as Linet Wambui, a 24-year-old  Library and Information Science finalist at Kenyatta University, joined Emmanuel Mango Mwonga 22-year-old fashion designer at Eastleigh Shopping Mall gave him the story of Kenya and the problems of the youth.
Linet had complained about tribalism.
“Does God have favourites? Why should the tribe of origin define us?” posed Linet.
To the Pontiff’s right in a separate tent, sat President Uhuru Kenyatta; the First Lady Margaret Kenyatta; Cabinet Secretaries, governors, and other government officials; while to another tent to his left sat the country’s bishops.
But for Linet, that cream of authority of the State and the Church did not stop her from telling the Pope what the problems of the youth in the country were.
She continued: “Sometimes, to get service in this country, one must pay an extra charge!”
You could hear a pin drop as the university student railed about the effect of corruption on ambitious but broke youth, and on poor families.  Even President Kenyatta was leaning forward, his hands clasped on his left knee. Quiet.
Emmanuel too tore into politicians for the incitement of the youth to violence. “They are being taught to hurt their neighbours … and to maim strangers,” he said.
He also complained about the obstructive policies  and drug abuse.  He said  “academic pressure” that makes those who fail in class, believe that they have failed in life was also a problem for the young people.
“If you fail, you lose and you keep losing. If you pass, the obstacles keep growing!” said Emmanuel, from Ekalakala Parish in Machakos Diocese.
When the Pope rose to speak, it is the words of these young people that struck a chord in his heart. He came with a message of hope.
“Life is full of difficulties, but there are different ways of looking at these things: Do you look at it as something that disturbs you or do you see it as an opportunity? Is it a path to destruction or a path to build yourself, your society and your country?” he posed. “You all have the capacity to choose. Do you want t overcome the challenges or be overcome by them?”
The Pontiff looked at the cheering thousands on the terraces at the 60,000 -seat stadium and spoke his heart out and asked the young people to pray and dialogue to defeat tribalism.
“If you don’t dialogue and listen to each other, then you will have divisions… because tribalism is like a worm that grows in society,” the global head of the Catholic Church said, before he asked every person in the stadium to hold hands as a sign of unity.
With Linet to his right, Emmanuel to his left and the dozen youth all hands clasped to the next persons, the Pope emphasized the message of unity. When the hands came down, he smiled and gave a handshake to the young people on the main dais, and he could be heard over the public address system saying “No tribalism!” with a fatherly chuckle.
On corruption, the Pope was emphatic that the young people had to take the lead in saying ‘No’ to extortion, bribery and all life shortcuts in the journey to worshiping money and riches. He blamed a rotten international system that puts money and wealth ahead of humanity for spawning the corrupt practices, but added that people must begin sowing humanity.

“Ask Jesus, pray to the Lord so that He can give you strength to fight tribalism; the courage not to allow yourself to be corrupted and offer your joy to others" -Pope Francis

To deal with radicalization, where people are recruited to become suicide bombers, the Pontiff said the lack of jobs, education, the “unjust international system” and lack of family love could be to blame, but with prayer, and good policies the country will succeed.
“Pray, and pray incessantly. God is much stronger than any recruitment campaign to radicalize people. Speak with tenderness, compassion, love and patience!” the Pontiff said.