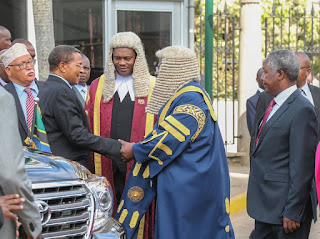 Kenyan lawmakers cornered Tanzania’s President Jakaya Kikwete and demanded an address in Kiswahili. The MPs who had sat quietly listening to the visiting Head of State address the House in English, pushed for a Kiswahili address from their guest, and being an easy man, Kikwete obliged.
The Tanzanian President’s aide promptly handed his boss a sheaf of papers with the Kiswahili version of the speech, and it is in there that the deep secrets, hitherto known to only a few people were poured out to the whole country in a speech beamed live on Kenya’s public broadcaster.
The Kiswahili delivered in a conversational tone, with the ease of a brother talking to a brother, Kikwete explained why, to Tanzanians, Kenya is a very important partner not just in trade and infrastructure, but also in creating employment.
He said the ties between the two countries, especially with the trade and the investments was key, and will not be severed under whatever circumstances, because any other way, will condemn Tanzania to poverty.
“Labda tupate mtu mpumbavu sana, wa ajabu sana… (unless we get a very stupid person),” said Kikwete, drawing laughter from the Kenyan lawmakers as they recalled former Kenyan President Mwai Kibaki who was liberal with the word ‘pumbavu’.
“Every smart leader will look for market for their country,” said the Tanzanian Head of State.
He said Kenya’s investments in Tanzania had employed 56,000 people who were “now able to marry or get married and live well with their spouses”.
The MPs laughed.
Besides, Kikwete revealed how he shuttled from State House to Prime Minister Raila Odinga’s office in the heat of the mediation efforts after the 2007-08 post-election violence. While insisting that he didn’t wait to be “invited”, Kikwete said he chose to come to Kenya to help his “relatives” heal and stop killing each other.
“When I came here, Kibaki told me two things, don’t leave and tell Kofi Annan not to leave. He also told me to stay around until everything was done. The person who brought the information was (former Minister of Foreign Affairs Moses) Wetang’ula,” said Kikwete.
The whole House erupted in laughter, and Wetang’ula, now a senator and a leading light in the opposition, watched with a wide smile on his face.
Kikwete got the joke. He chuckled.
“That’s how democracy works!” he told Wetang’ula.
Then he joked that when Wetang’ula told him to stay, he wondered if there was enough room for two Presidents in Kenya at the time.
“I also had a country to run! But I stayed anyway” he said.
“I met Kibaki and Raila, we spoke; I shuttled from one side with a message to the other and back again, until we reached a consensus. We got a deal, we came out, they signed the deal, and a new Kenya was born.  What happened back then was bad, it should be a lesson so that it doesn’t happen again in future,” said Kikwete.
When he was done, Senate Speaker Ekwee Ethuro and National Assembly’s Justin Muturi, who had earlier addressed the House in English, all decided to address in Kiswahili, much to the delight of the MPs.
Ethuro said he had met “a teacher of Kiswahili” in the Tanzanian President, and he was now a “student” and as the House roared in laughter, Muturi had to step in with ‘Nidhamu! Nidhamu!” for ‘Order! Order!’ but that too sent MPs into stitches.
In the end the House was adjourned for 30 minutes to allow Kikwete to leave and the MPs to resume their sittings in their respective Houses.

An abridged version of this story was published in The Standard on October 7, Page 3. Here's the link to that version: http://www.standardmedia.co.ke/article/2000178771/president-kikwete-s-flawless-swahili-wows-kenyan-legislators