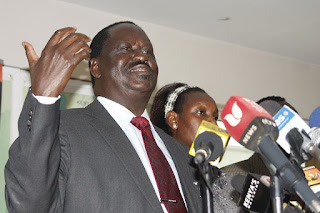 PHOTO/ RAILA'S FACEBOOK PAGE
Opposition leader Raila Odinga Friday honoured a promise he made a week ago with the release of old names in a new style, this time, with an explosive declaration that the names were mysteriously deleted from President Uhuru Kenyatta's dossier on corruption.
At a news conference in Nairobi's Capitol Hill offices, Mr Odinga said the name of Devolution Cabinet Secretary Anne Waiguru and electoral chief Issack Hassan as those that were left out of the final dossier that the chief executive of the Ethics and Anti-Corruption Commission Halakhe Waqo submitted to Parliament four months ago.
Raila’s statement came with just seven days to go to the day US President Barack Obama is scheduled to arrive in the country to for a key visit at which he is scheduled to address the runaway corruption in the Jubilee administration.
It also came a day after he met the chief of the Independent Electoral Commission, Raila said Waiguru and Hassan have to quit and subject themselves to investigations by the EACC.
Raila's onslaught on the duo has been on for some time now.
Raila railed against Hassan over the rigged elections and was particularly irked when Hassan told the Supreme Court that Raila was a "perennial loser" of polls, and therefore his (Raila's) claim that he was rigged out in the last General Election had to be dismissed.

"Your guess is as good as mine on why IEBC officials have to be protected. They delivered for Jubilee," the Opposition leader said Friday.

READ ALSO: Raila Odinga tells IEBC chief Issack Hassan he has no faith in electoral body
For Waiguru, Raila has been on her neck from the day it emerged that the Central Bank and the Directorate of Criminal Investigation were pursuing investigations against her.
"We will not take the President seriously on the war on corruption until all (alleged) thieves are treated equally. The law must apply on all scandals over IFMIS, NYS and IEBC in the same way it has happened in other ministries" Raila said.
IFMIS
According to Raila, the de-facto leader of the Coalition for Reform and Democracy, Waiguru has to quit Uhuru's Cabinet because she signed a deal for the implementation of the Integrated Financial Management System, which was under EACC investigation at the time that Uhuru submitted his dossier to Parliament.

"If IFMIS was being investigated by the EACC for the inflation of contracts to the tune of Sh1 billion, why didn't the Cabinet Secretary at the time of the suspicious transactions step aside?" posed Raila.

Holding up the same list that Uhuru submitted to MPs, Raila pointed out at case 15 on the IFMIS scandal that was reported to EACC on November 18, 2014 regarding "inflated consultancies and disregard for procurement procedures".

The EACC said the "IFMIS re-engineering" cost Sh1.5 billion, when it should have cost less that Sh500,000. There was also another project that cost Sh900 million whereas the true value was Sh300 million. The "suspect" according to the EACC dossier is "procurement director", but Raila insisted that it was Waiguru who signed the contracts and therefore she had to bear the blame.
Waiguru was the boss of IFMIS at the time the contracts were signed.
Raila was armed with letters from the EACC showing that sleuths of the commission had sought documents from the National Treasury regarding the payments for licensing of IFMIS and consultancy, and for the purchase of Oracle hardware to upgrade the IFMIS servers. All these payments, he said, were approved by Waiguru on diverse dates between 2011 and 2012.
When the contracts were signed when Uhuru's Chief of Staff Joseph Kinyua was the Permanent Secretary at the Treasury and Uhuru was the Minister for Finance, from where he quit to give way to Robinson Githae, under whose tenure more payments were made.
Raila's view was that IFMIS deserved a thorough forensic audit to make sure that the Jubilee administration was not using the system to steal public funds.

"Kenya's experience with IFMIS demonstrates the mess our public finances are in... The saga has also demonstrated that you can't digitize integrity with a silver bullet computer programme that is itself become an opportunity to rip off the public," said Raila.

Read here about the rot in IFMIS
The CORD leader added that Waiguru had two months ago been warned by the current principal secretary of the National Treasury Kamau Thugge for spending Sh4 billion in the supplementary budget for the last financial year.
"Was it incompetence, greed or something else that caused the Cabinet Secretary to underestimate her budget by Sh5 billion," said Raila.
To make that additional request, Waiguru had ignored the advice of the Acting Director of Budget at the National Treasury.
Read here more about Auditor General’s report on spending in Waiguru’s docket
For Raila, if Uhuru's goal was to fight corruption then no minister should be a "favourite".
Hassan's sins relate to the case that was settled in the British Court, what in Kenya is known as "chicken-gate".

"The court in London named specific officials of the Interim Independent Electoral Commission some of whom are still officials of the IEBC, and named specific crimes they committed which has led to the jailing of their partners in crime in the UK. In the list presented to Parliament, EACC claims not to know the IEBC officials and makes no mention of the monies involved," said Raila.

At the same time, Cord leader Raila Odinga condemned the attack on Kakamega Senator Boni Khalwale at the courts in Nairobi. He said the perpetrators of the "stupid incident" have to be arrested and their sponsors have too have to be prosecuted for trying to subvert due process.
Ends!