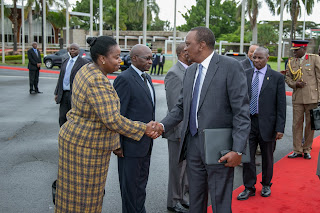 Caption: President Uhuru is seen-off at the JKIA by the Cabinet Secretary of Interior and Coordination of National Government Maj. Gen. (Rtd.) Joseph Nkaissery the Chief of the Kenya Defence Forces Gen. Samson Mwathethe among other senior government officials as he leaves for Dar-es-Salaam, Tanzania to attend the Emergency Summit for the EAC Heads of State on the Political Situation in the Republic of Burundi in this May 31, 2015 photo. Thanks to PSCU.

President Uhuru Kenyatta tasted his first defeat in 2015 in the House when MPs, a majority from his ruling Jubilee coalition, voted to reject Dr Monica Juma, his nominee for the plum post of the Secretary to the Cabinet.

The lawmakers in the National Assembly stamped their oversight authority and agreed with the committee that vetted Juma, the current Interior principal secretary to gauge her suitability for the seat of Secretary to the Cabinet.

The verdict from the House was unanimous: the nominee had to be rejected. The decision of the House has put the President in a legal dilemma, because the decision of the House effectively means that Juma may not continue in public service, given that the people’s representatives have no faith in her leadership. Her replacement at Interior, Maj.Gen (rtd) Gordon Kihalangwa is scheduled for vetting in the House.

The big news of the day was the Budget speech by the National Treasury’s Cabinet Secretary Henry Rotich, but the belligerent MPs were determined to block Juma’s nomination, and they delayed Rotich by half an hour to make their point.

Majority Leader Aden Duale and his Minority counterpart Francis Nyenze had tried to push through the debate and Juma’s approval and to even seek more time to change the minds of the MPs, but they failed.

MPs voted 163-55 to reject the proposed extension by ten days, and then voted verbally to reject Juma’s nomination for the Cabinet job. Three MPs abstained from the vote.
As Duale and Nyenze spoke, their respective voices were drowned by chants of “Juma must go”, but a group of MPs that wanted the PS to get the Cabinet job countered with “Juma must stay”.

The MPs shouted, waved, stood up and basically threw tantrums to get the attention of Speaker Justin Muturi to put the matter to vote. The Speaker tried to ignore the shouts, and when he couldn’t hold it any longer – the MPs were too unruly, it was like a market place on market day—he stood up and reminded them the essence of decorum.

“The majority will have their way, but the minority must also be allowed to have their say,” said Muturi.

The chairman of the Administration and National Security Committee Asman Kamama asked MPs to back his report rejecting Juma, and as soon as he was seconded by Humphrey Njuguna (Gatanga), the die was cast.

Kamama and Njuguna harped on the controversial letter by Juma to the clerks of the two Houses --  that MPs were seeking illegal favours from her office, and that she won’t entertain any illegal plots against public servants--  to marshal the numbers for her rejection.

The other MPs shouted: “Shame! Shame!”

The belligerence persisted even as Duale reminded them that every public officer deserved due process and not the lynch-mob that the lawmakers had wanted to put Juma through. Duale insisted that MPs had to be heard.

“We should not be in a hurry… Not everybody wants to speak on this issue, but there are some people who want to speak on the matter and it is better we allow them to be heard,” said Duale, but he was shouted down.

He was forced to sit down twice after the House became too unruly and the Speaker had to plead with MPs to keep quiet.

“What is the problem? How can we transact business this way! Stop! You can’t do that next to me, surely…” Muturi said

But the shouts and loud banter continued.

In the end, the Speaker conceded: “There’s no point in trying to extract blood from a rock!”

When he put the matter to vote, the MPs voted overwhelmingly to back the committee’s report which was emphatic that Juma had to be rejected.

Before the drama in the House, 15 MPs from Ukambani had addressed a news conference at which they said the rejection of Juma was part of a grand scheme to kick out prominent figures of the Kamba community from the Jubilee government.

“The malicious rejection of ambassador Juma by the committee was not based on any objective criteria but was based on malice, hatred, ethnic prejudice, jealousy, petty vindictiveness and rumours,” said Nyenze.

The MPs said key figures such as the former boss of the Ethics and Anti-Corruption Commission Mumo Matemu, Cabinet Minister Charity Ngilu and Transport principal secretary Nduva Muli had all been thrown out. Matemu resigned, while Ngilu and Muli were forced to quit temporarily to be investigated over corruption.

But to the MPs, everything was choreographed.

“The reasons given for her rejection were that she refused to grant some few individuals illegal favours and refused to use shortcuts in doing her job. This is shocking!” said Nyenze.