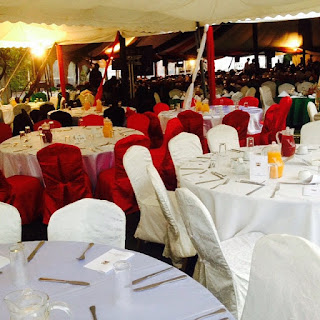 PHOTO CAPTION: The tables set for the National Prayer Breakfast at Nairobi's Safari Park Hotel, in this picture that I took early morning, two hours before the guests settled in.

A day after calling opposition politicians “fools” anddismissing their style of politics as “uncivilised”, President Uhuru Kenyatta joined other politicians and the country’s top officials for the annual prayer breakfast in Nairobi.

The twist of the event saw politicians, who usually tear each other in public forums, and others of them known for impunity and misconduct, gather at the five-star Safari Park Hotel, to preach, pray and sing as they sought divine intervention in the problems of the country.

That oddity was not lost on President Kenyatta and his Deputy President William Ruto, who when they rose to speak, had to tell the “wonderful politicians” -- in the President’s words-- to walk the talk.

Ruto left the crowd in stitches when he said that the thought it was a “mistake” for the Deputy Minority Leader Jakoyo Midiwo, known for his stinging criticism against the ruling Jubilee coalition, to be given a chance to read the scriptures.

“When the chairman of the National Prayer Breakfast announced that Jakoyo Midiwo was going to read the scriptures, I thought it was a mistake. But not until the President pointed to me that Baba Yao (Kabete MP Ferdinand Waititu) was actually in the choir. Then, I said, it is alright. There is a God up there who doesn’t judge us through the eyes of men,” said Ruto, as the crowd roared in laughter.

The chairman of the National Prayer Breakfast is Mathioya MP Clement Wambugu.

Midiwo read the bible from the book of John 6:1-13 recalling the miracle where Jesus fed 5,000 people.

If you checked the Hansard of the National Assembly and of the Senate, or even watched video clips of political rallies; and then tried to reconcile what was said at the prayer breakfast, it will be easy to understand the shock of the President and his deputy at the choice of the leaders of prayer, and the choir members.

Interior Cabinet Secretary Joseph Nkaissery, a former MP, was also not spared a presidential jibe, when the Deputy President noted that the parliamentary choir this time had harmony, and did not sing off-key like last year.

Nkaissery said: “It is a very interesting choir, we don’t rehearse, but we sing very well!”

For Nkaissery, the presence of former Vice President Moody Awori, who had been rumoured to be dead on social media, was a perfect opportunity to continue with his hostile stance against the vibrant Kenya’s press that keeps the Interior ministry on its toes due to the rampant insecurity.

Nkaissery chose to attack the mainstream media, which told the country that Awori was alive and well, for the social media rumour-mill.

“Yesterday I had the opportunity of meeting with the media and we were talking about responsible reporting. I am so happy this morning that they had sent Uncle Moody to the creator but Uncle Moody is here with us,” said Nkaissery.

Awori, who was enjoying banter with Majority Leader Aden Duale, chortled with laughter.

The chairman of the Justice and Legal Affairs Committee Samuel Chepkonga, whose committee sent home the commissioners of the Ethics and Anti-Corruption Commission just over a month ago, also had a moment to preach, and later, to issue a prayer for “integrity”.

The straight-talking Chepkonga spoke to the podium about “doing the right thing”.

“Are we still pursuing godliness and righteousness which is the vanguard of our faith?” posed Chepkonga to his colleagues.

All said, it was a rare side of politicians. Now, if only they can walk the talk? Or did they just lie to God as they keep lying to the electorate in public rallies?