December 31, 2014
I don't know if my website (www.shiunduonline.com) has been attacked again. I didn't do anything that bad, like subvert the regime or something. But for some reason, I can't open it. I am working around it, because I really wanted to post this article there. Now that it is offline, let me come back to the blog after, two years. I guess I will have to pay Google for the domain (Don't buy and hoard it, so that you sell it to me later). 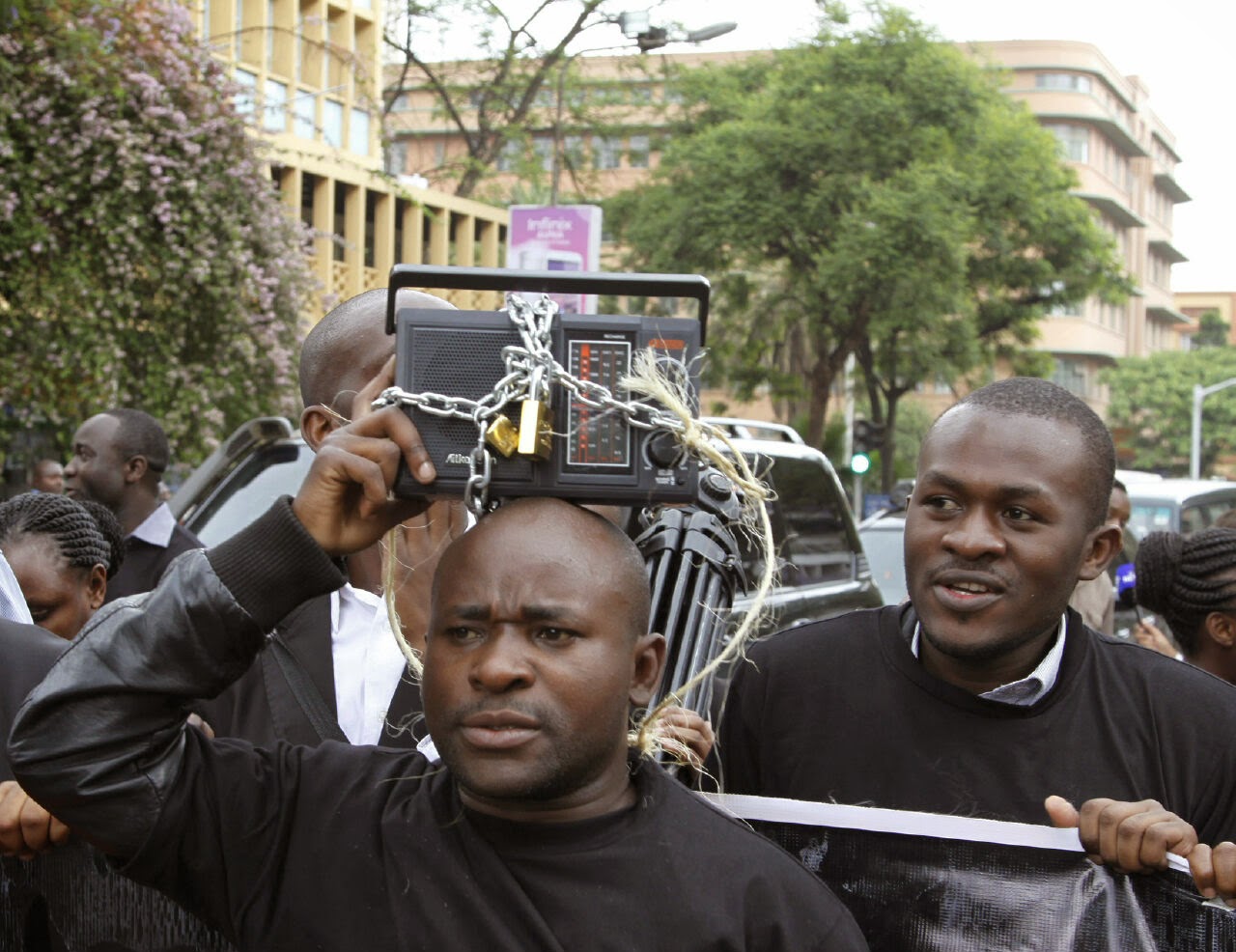 That's Mshamba and I at some demo over draconian laws. The things I have done since the new government came to power, wacha tu! (Photo/Good Samaritan on Whatsapp).

It always breaks my heart when I get a tip for a story but I fail to tell the tale because either I don’t have the time for the legwork involved. Sometimes I call in a few favours from friends and colleagues to help me out, but the problem is, it doesn’t look like an “assignment” but a “favour”. Unfortunately there is only so much you can do.
They say if you want something done right, do it yourself! I know, I know, when you are obsessed with words and the way they come together to tell a story, you think you are the only one who can tell something in a given way. It is bad manners not to delegate. That I know (Fi, don’t kill me now).
But I have this little thing that gnaws at me when I see perfunctory delivery. It is a delivery yes, but with gaps. To fill those gaps, to tell the three truths – my truth, your truth and the truth itself— you have to do fresh legwork. I hate double work, so some tips, if they don’t materialise, dear tipster, it is because, I couldn’t do it myself.

Confession
This is a conversation I am having with myself. It is one of those things I do every night, but this is not a night, it is the last day of the year 2014. That is why I am writing it down.
As I kneel in this confession booth in my mind, I have to agree that some stories were written. They were not told. There’s a difference. If I remember the headline (thanks to the brilliant copy editors) but I don't remember the content, you didn’t tell the story.

I am a sausage guy. You give me a pig, I will give you the sausage. I hate excuses. I hate procrastination. I expect the same of everyone. But this year, I got my lesson about people: They are not computers. I work with systems, I enjoy computers (Gerald and Boniface, hello nerds! Ha! Ha! Ha! I am not joining you in IT, I still have to shore up my social skills, especially patience for mediocrity, time-wasting, you know, the works!).

At times, I think, what the hell! The newspaper will still come out tomorrow whether you tell that story or not. But that is a stupid way to look at it. What’s the point of journalism if you miss the real news that people who read you care about?
I look at my job as telling stories quickly and recording history as it happens. I try to give people information. I try to make them use that information to make decisions. I try to tell the multiple truths in any newsworthy event, in the most honest way so that people understand why they should care because something happened somewhere.

'Stop fooling around'
When you handle politics, public policy, legislature and governance news beats, you are always trying to build a better country; some say we try to nurture a democracy (or shore up a dictatorship). I guess that is the duty.
I think the people who would keep me in the straight and narrow, people who would tell me if I write something mediocre to “wacha ufala …stop fooling around” (ha ha Kapchanga, you should be easy on me sometimes) got tired, or I actually took their counsel and they have nothing to add. I would never know if they think I am trying too hard or if they think the effort is good enough.
But the fact that they used to call with such comments as "Alphie, sasa hii ni story gani umeandika? Let the documents speak, what is this comment by (insert some well-known incompetent, corrupt, big-talking politician or mandarin) doing in copy?" Or "Why haven't you told us the story of this guy?" (Nzau Musau, ha ha ha ha I will survive!!!)

I remember Joe Kadhi – Google and Bing are friends if you don’t know that name – told me this year, when teaching parliamentary journalists about Ethics and Integrity, that "it speaks volumes about your integrity when you write good things about someone who everyone knows is corrupt". I always remember that when talking to politicians.

Yes Mheshimiwa, now you know why I don’t feel comfortable around you. It is just the perception that all of you in the august House are “pigs” (oops! I guess that was inspired by George Orwell’s Animal Farm and domesticated by Boniface Mwangi and his gang of patriots!)
But I got to tell some stories. Sometimes all that was needed was an hour to get a sit-down with a super story teller (Thanks CEO for the Boy Juma Boy assignment) to get the public to know their leaders.
For the few years that I have been writing, I have learned one thing: It is a thankless job, but it is sweetly gratifying to see your work published, and the story told the best way it can be told. It is fun too. I enjoy it, immensely. Even if they gag us, life goes on.
I have been called a CORD supporter; I have been called a Jubilee supporter. Why the dichotomy: You are either with CORD or Jubilee. Can't I be politically agnostic?  I don't know why these people have never seen or seem to ignore my soft spot for Mwalimu Mohamed Abduba Dida.

Of course, I love this country, but my dislike for the government's shortcomings have been consistent. I am a simple guy, with a simple dream about this country. I just want to wake up, tell a story, sell it, go home and eat and sleep. And of course get paid for a job well done. If the story changes the world, great!
If the story doesn't favour you, pole sana! Journalism is not the business of pleasing people. I follow the scent of a good story. Sometimes my good story might be someone else's worst nightmare. It is just a job. Nothing personal. It is quite unsettling when I tell a story and I get a thumbs up from someone who would normally make noise and make all manner of calls. I either think I missed something or the fellow is just passing a quiet threat.
Okay, what stories did I not tell in 2014: