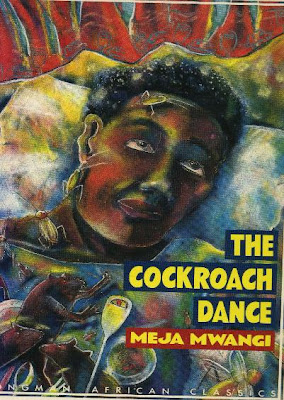 I went home over the weekend. I came back just in time to pick a pal who is in the country from Sierra Leone. But it is a busy week ahead and I know if I don’t get this posted, it may as well never make it.

I have been reading the Cockroach Dance, a book by Meja Mwangi. I picked the book off the shelves at Nairobi’s BookPoint Bookshop on Moi Avenue. I occasionally go in there to browse books so that come payday, I know what I am going to buy.

So, one fine morning, I went to the bookshop and in my browsing, I saw this book. It was funny and after reading the blurb, and looking at the price –Sh450—I decided to buy it. It’s my first Meja Mwangi book, and I found it quite fascinating.

The guy has talent for telling stories in the most simple way. He has a funny way of expressing his ideas and an acutely interesting gift when it comes to describing scenes. In this book, he traces the life of one Dusman Gonzaga and his neighbours in Dacca House.

Yes, this may not familiar, because the book is set in the 1970s, but there’s huge familiarity when he describes the lifestyle of the man. It is the kind of life that your typical Nairobi hustler would lead.

If you’ve lived “on the other side of Moi Avenue”, with all those dedicated souls struggling to be rich, but because of greedy and exploitative employers they remain poor, then, perhaps, you’d know, the rat race.

Dusman is the main character, he lives in this place with Toto. That’s his roommate. But it is not until very late in the book that we get to see that Dusman had no idea about Toto’s real name. He’s in jail when he finds out that Toto, an ordinary bank employee, had been involved in some kind of international scam.

In this life, where we don’t know our neighbours, Dusman has labeled those he doesn’t know as “the faceless ones”, but he identifies the rest by the kind of lives they lead: There’s Sukuma Wiki who sells vegetables; there’s Magendo the thief and smuggler; there’s Chupa na Debe who recycles garbage; there’s the Bathroom Man, who lives in a bathroom with his wife and baby; there’s Mganga the withdoctor and there is vuta wiki, of course, Sukuma Wiki’s wife.

The life of two broke bachelors in the city is laid bare in this book. They keep on saying “we have to get organized”, but then they don’t act to “get organized”. They dream big, about cars, nice houses and all, but still they live in some deplorable house. They get prostitutes every end of the month when they have the money. They drink like there’s no tomorrow. They don’t wash utensils and they eat eggs a lot. One, of course, is more broke than the other, but together they share the little money they get.

Sometimes, they sleep hungry. And when you go to bed hungry, the hunger pangs keep you awake and you get to see cockroaches as they come out of their hiding places. Now, Meja describes the cockroaches in a sweet way.

For instance, he says one giant roach that crawls from its hiding place under the bed, yawns and looks around for the food. It realizes there’s no food and goes out to the garbage cans to scavenge some more. Then there’s the “mating dance” of the cockroaches. It is unbelievable that someone can observe cockroaches that much. And by the way, Dusman is annoyed. At the roaches, at his landlord, at the fellow tenants, at a man who shags his fat wife over lunch hour, at a thief whose attempt to steal the bathroom man’s wife flopped.

And when he drinks, Dusman becomes violent. He fights everyone.

The book is a narrative of the daily struggles of fellows like us, who still have to ride matatus to work (that’s when we have money) and walk to work when that money is over.

Dusman has to fight so many things. His boss thinks he’s mad; he has to write ‘letters to the editor’ for his neighbour who hawks vegetables; he has to talk to many other people and convince them to revolt against the landlord. The revolt against the landlord also shows that sometimes, our expectations are different.
While some may think life ought to be better, others are grateful that they are living in a place with electricity and a stone house (never mind that it is a small room that was meant to be a bathroom). To this person, the alternative, of living in a tin-house or say, one made of paper, is not one they can contemplate.

Life in Nairobi is still the same as it was back in those days. River Road is still there and so is Hasrat Road. Not that I expected them to fade away with the passage of time, but then, if Queensway Road was rebranded, I just thought, it would be fair to rebrand this one too.

The watchmen still doze off outside the buildings and just like in those days, they get banged by the drunkards. Their batons get stolen. And, yes, they scream when thugs strike.

And now the description: Can you picture an “off-duty scarecrow”? What about a “retired grave-digger”? Those ones stuck. I know not why.

It’s a book that you can take in slowly by slowly. Although sometimes it sounds like a ramble, if you read it slowly by slowly, you can squeeze out the juice. It’s a nice read. I give it five stars out of seven. A super read.