Showing posts from June, 2011
Show all

What if KRA goes ahead and taxes MPs?

June 24, 2011
The tax sword threatening the MPs’ hefty perks will dent their financial muscle significantly. They know it and that’s why they’ve vowed to fight it to the end, an end which, if indications from the Judiciary are anything to go by, might just turn out to be a bitter and a broke one. A chat with tax experts and auditors from two multinational auditing firms –all who spoke on condition of anonymity because of internal red-tape concerning speaking to the press—revealed that all the perks, namely car maintenance, housing, extraneous duty, entertainment and constituency allowances, will be taxed at 30 per cent. The Sh366,000 blanket mileage package that each MP gets will also face the same axe and so will the Sh3.3 million grant given to every new MP to purchase a new car. Their sitting allowances of Sh5,000, per sitting, have also not been spared. The tax experts argue that these too will have to be cut to Sh3,500 once the taxman strikes. It is this sitting allowance that saw MPs p
Post a Comment
Read more

June 22, 2011
Folks, bear with me. I am a journalist and ought to have picked the payments to KenRen moments after the Budget was read. I did not. It is a story I have covered in the hearings of the Public Accounts Committee report on the government accounts in the fiscal year 2007/2008. So this is going to take long to read, but if you want to understand the real issue, be my guest (in a good way). Since then, I have followed it keenly, trying to see exactly if the shameless theft of money under President Kibaki's government will go on. Thank God for people like Mwalimu Mati for pointing that out to me. We met at Parliament's County Hall where he'd come before the Budget Committee, to really tell them about the theft of public funds . It is an item under Public Debt in the Consolidated Fund Services. Just check page 16 on this Treasury link and confirm that this guy knows, a lot of times, what he's talking about. So, when I asked him, how come I couldn't pick it up, he
Post a Comment
Read more

June 20, 2011
I had a chat with Dr Wilfred Gisuka Machage, an MP and a suspended minister about his life in suspension. I didn't think he was deluded, I just thought that he is a man who believes in what he says and doesn't give a damn what anyone thinks about what he does. But then, when the National Cohesion and Integration Commission saw whatever he said and interpreted it differently, he has now been put in hot soup. The editing by the media and all, it is just a version, of how the public processes information. What type of honourable creature is this in the House who can neither ask nor answer questions?” This remark, made in jest by Olago Aluoch, the straight-talking MP for Kisumu Town West, sums up the anguish and dilemma facing suspended assistant minister Wilfred Gisuka Machage. Though Mr Olago posed the question in Parliament a year ago — and he was forced to apologise for calling a fellow MP a “creature” — that question is still in the minds of many, as to what exactly is the r
Post a Comment
Read more

Well, is it a must that Tobiko becomes DPP?

June 14, 2011
Yesterday, after a breakfast meeting with the chairman of the Commission for the Implementation of the Constitution, I had a chat, a quick one, and a very brief one, with Mr Gichira Kibara, the brilliant secretary of Justice and Constitutional Affairs of the Government of the Republic of Kenya I asked him if he thought the elections will be held in August or in December 2012 or if we're looking at 2013. He smiled and said that it doesn't matter when elections will be held, but that, the country was already late and that we're likely to pay the price for that lateness. Now, 'paying the price' may sound like a vague expression, but if you were in the country in 2007 after the polls, it is an experience you wouldn't want to re-live. That aside. As we had breakfast, Mr Kibara, had spoken about the debate about whether or not to approve Keriako Tobiko as the Director of Public Prosecutions. He had urged caution about the wished-for suspension of the approval
Post a Comment
Read more

Budget Day: View from the gallery!

June 12, 2011
From the vantage Press Gallery, the on-goings during the reading of the first Budget under the new Constitution was a spectacle that will be forever etched in the history books of the country. And it's not because it was Sh1.2 trillion worth of projections. It's the 'colour'. Looking down at the MPs, it was evident that most of them were in the House to see how Finance Minister Uhuru Kenyatta will handle the reading of the annual financial statement –the Budget Speech. They were not there to listen attentively to what the minister would say, because, in any case, the committees of the House will have the final say on the national budget for the 2011-2012 fiscal year. Though House Speaker Kenneth Marende had promised a ministerial statement, he too, had to strike a balance between what the Constitution says and what the Standing Orders stipulate with regard to the presentation of the financial statement. In the end, Mr Kenyatta had his chance to read the budget in the
Post a Comment
Read more 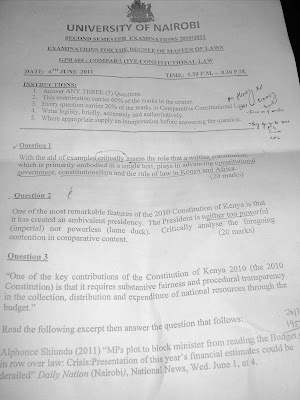 Good people, It is not everyday that I get the chance to floss. But there's a lawyer friend of mine who shocked me with this question paper they did early this week. They were actually being told to use my article as a basis for their arguments on the Constitution. It is not just any other exam, it is an exam for people studying for masters in law, in their second semester at the University of Nairobi. How about that? Well, if you don't believe me, here is the question paper: At the bottom, is the citation of my article that appeared in the Nation on Madaraka Day! Hehehe...I had to look at it twice: And h ere is the question that the lawyers grappled with. I am not sure the article helped much, but then again, there are those who found it useful. No? Anyway, you can read the online version of the article .
3 comments
Read more
More posts