Showing posts from July, 2010
Show all

July 30, 2010
“ The Nairobi of a decade ago was an urban wasteland, where human suffering was no less endemic than in its rural polar opposite, Turkana, and where the danger of being eaten by hyenas, albeit in the human form, was no less real. The crowds of street people, their excrement caking the pavements, the muggings and shootings and the potholes, which were more consistent in their population that the few stretches of smooth tarmac, were metaphors of a desolate, beaten society. Kenya is in the tight hug of the before-the-election-violence and after-the-election-violence polarity, a piece of shallow but vicious analytical malfeasance, which has wrestled history to the ground, torn it into two contrasting pieces, and pegged it down like wet skin, with the antics of the political elite writ large, in blood. This polarity ignores the fact that one big mistake may have defined the decade, but it was neither alone, nor was it the only event with influence on the future. The stealing of election
Post a Comment
Read more

July 30, 2010
It's George Orwell's Animal Farm all over again. The politics of two grandfathers is selling newspapers and hogging media airtime. Kibaki is better than Moi. Moi is better than Kibaki. Depends on who you are. But I will remind you that none of them is better. They all failed the country in their own ways. I saw two old men behaving badly this week. They were attacking each other over this document called ‘katiba’. Well, they are politicians. They’ve both made false promises. And we all know it. Does any of them have a track record? They both have. Both good and bad One of them, President Kibaki, ensured that in seven years we have good roads (that’s what people say until they step on the Mumias-Bungoma cattle track. It’s like you are going to the Mara! When Moi was there…it was like the Naivasha-Gilgil) and a bouncing economy, the other one, former President, Daniel Moi, made sure we never killed and slaughtered each other, even as we died as paupers. So all of a sudden –beca
Post a Comment
Read more

The 'jury' has returned the verdict, the 'crime' is still in progress 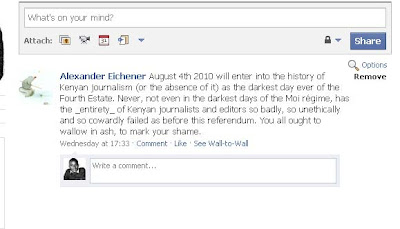 July 30, 2010
"[Every week], I sit at my desk and bang out the first draft of [stories, or as I call them analyses] that I will then agonize over and rework and rewrite and read aloud for days before hitting send. And then (because the confessional memoir is all the rage) I will go into the “Sent” portion of my e-mail account and re-open the document that I have sent out into the world and I will worry about it until it’s published. And then I will wait. Not for accolades or notes of congratulations. I wait for someone to tell me I am wrong. Part of this is because of the way I was raised. I was surrounded by a strong extended family that was there to be measuredly proud for our successes but also to remind us who we were and where we came from. Often. And loudly." That's not me. It is Tom Avila writing in one of my favourite websites. I recommend that site to all Kenyan journalists, including editors who've ever written a story. For real! I agree with him one hundred per cent.
Post a Comment
Read more

July 19, 2010
“Politicians bore me personally; they know how to manipulate the news…I don’t believe anything any politician tells me.” - a media consultant (a former BBC journalist) now based in Tanzania Enter the most recent king of whiffle politics, Kigumo's MP Jamleck Kamau. He's one chameleon (forgive the cliche). Really! I don’t mean to be slanderous, so let me start with what I can prove. For the record, I will not call him an inconsequential doofus. Neither will I call him a moral no-show. He is just a politician suddenly thrust in the limelight by virtue of being “a roadblock” in what Kenya’s scribes have baptised as an 'impending life-changing moment in Kenya'. Mr Kamau is a vice chairman of the Party of National Unity and a commissioner in the Parliamentary Service Commission. A fortnight ago, he was all over Parliament making noise that the House Business Committee –that powerful team that decides what’s debated in Parliament—had kicked out his Bill. The crux of
Post a Comment
Read more

July 19, 2010
Are you amazed at the comments on this Q & A? Especially the ones that say the answers are full of ‘hot air’ and that ‘Ruto is dishonest’ and that someone, on the basis of this interview, has decided to change the vote to ‘NO’ after being in the ‘YES’ camp since the start? Which 'space' do some people occupy? I am. I am appalled. When people can’t poke holes in an argument, when the draft is even online , I get worried. So, we are not a ‘reading nation’ and so we depend on who speaks that which resonates with us. When it comes to the proposed Constitution and Mr Ruto’s arguments, I know better. I have been with the team all through the process. I have listened to the arguments, all of them. I know them by heart. I can give you all the counter-arguments just for the sake of it. But that is no way to analyse, and even debate the proposed Constitution. If we all read and got something in there to smile about, we can go ahead and vote ‘YES’. If we read and find that our c
Post a Comment
Read more

The Ban on KISS, Classic, X, Jambo and East Radios, plus the Star.

July 14, 2010
Hey people, House Speaker Kenneth Marende made this statement in Parliament. He has been under fire for making the statement. But then, I guess, that's what I would have done. People do perish because of lack of knowledge and it's very bad when emotions take over journalism. For real. People are people. Here is the statement in full: COMMUNICATION FROM THE CHAIR BANNING OF RADIO AFRICA MEDIA REPRESENTATIVES FROM PRECINCTS OF PARLIAMENT 13th July, 2010 The SPEAKER: Hon. Members will recall that on 6th July, 2010, the hon. Shakeel rose on a point of order in which he informed the House that on a radio broadcast aired that morning on the radio station Kiss FM, the presenters had made remarks that were demeaning to the Office of the Speaker and this House as a whole. Hon. Shakeel sought the directions of the Chair as to the action that ought to be taken in that instance. Hon. Members, the media is an important facet of our democracy. So important is the media that it has often
Post a Comment
Read more

Three sides of a lion story...

July 01, 2010
I just watched news. David Ndii, an economist was actually very truthful with the cost implications if the ‘Greens’ have the day. Fix the governance, at whatever cost, and the business will take care of itself, he said. But then Njoki Ndung’u speaks and, she who claims to judge others, says the Committee of Experts (she’s one of them and she had drama back then (so, I read) when they were discussing this stuff) done some savings by removing assistant ministers. Aha! So where is the maths? Right now, we have 222 MPs, in the proposed structure it will be 416MPs. Now, just by looking at it, what does that mean? Then there are county assemblies all over, er not really, just 47 of them. Will she tell us that they are just restructured provincial administrations and municipal councils? Then the Clerk of the National Assembly says there are going to be 1,000 new jobs in Parliament if the new law gets the nod in the August referendum. I think, she’s just blinded, even scared, at the
Post a Comment
Read more

July 01, 2010
I am very mad. Someone is taking my sleep foregranted. I mean, how do you bring Joshua Kutuny (Cherangany MP) and Kabando wa Kabando (Mukurweini MP) to discuss youth issues in the Constitution? And just when I thought we had real panelists, apart from the two hypocrites of politicians, I got the shock of my life. There’s this girl, Susan Kariuki, a youthful executive director of some youth trust. She looks straight into the camera and says: “Parliament should make policy and not engage in governance issues.” Goodness me. What ‘space’ does she occupy? Parliament is “Legislature”, they make laws! Government makes policies and implements them based on laws passed by MPs (lawmakers)! I am mad. Angry! After such an illiterate statement, I switched off the TV and came here to rant. They should go on recess like now now! Before that Okiya Okoiti Omtatah spoke very well. He filed a case in court to challenge the existence of the parliamentary service commission. I remember him being
Post a Comment
Read more
More posts